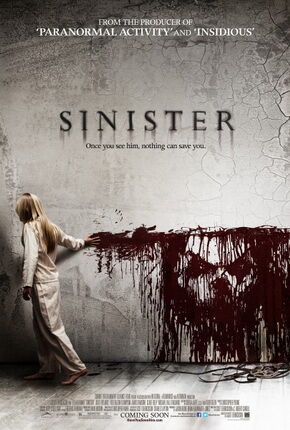 Sinister is a 2012 supernatural horror film directed by Scott Derrickson, and written by C. Robert Cargill. The film was released on October 12, 2012 and premiered at the SXSW festival.

True crime writer Ellison Oswalt moves into a home with his wife Tracy, their 12-year-old son Trevor, and their 7-year-old daughter Ashley. A decade earlier Ellison's book Kentucky Blood was a best-seller but he has struggled to make an impact with subsequent works. Unbeknownst to Ellison's family, he has moved into a home where a family was murdered, all hanged by ropes on a tree in the backyard. Ellison intends to use the case of the murdered family as the basis for his new book and hopes that his research will reveal the fate of the Stevenson family's fifth member, a 10-year-old girl named Stephanie who disappeared following the murders. Later that night Ellison discovers in a box a screaming Trevor, who was having a night terror.

Ellison finds a box in the attic that contains a projector and several reels of Super 8 mm footage that are each labeled as home movies. Ellison discovers that the films are actually murder footage depicting different families being murdered in various ways, including hanging, drowning, throat-cutting, and arson. Each murder is performed by an unseen person holding a camera and filming the killings. Ellison notes the appearance of a mysterious semi-circular symbol in the films as well as a strange masked figure. One night, when Ellison's family are away, the power shuts down and he hears strange noises in the attic. Following the noises, Ellison finds a mysterious drawing in a child-like manner, which depicts the murders and a strange figure of "Mr Boogie" standing next to the victims. Ellison then suddenly falls down a hole in the attic, thus slightly injuring his leg. Consulting a local deputy (who nicknames himself "Deputy So & So" in a bid to get a thank-you acknowledgement in Ellison's next book), they discover that the murders took place at different times, beginning in the 1960s and in different cities across the country. He also learns that a child from each family went missing following every murder. Meanwhile, strange things happen in the house. The deputy refers Ellison to Professor Jonas, whose expertise is the occult, to decipher the symbol in the films. Jonas tells Ellison that such symbols refer to an ancient and obscure Pagan deity named Bughuul, who would kill entire families and then take one of their children in order to consume their soul. Jonas suspects the murders are part of a cultic initiation rite, rather than the work of a single person stretching across decades.

One night, Ellison hears the film projector running and finds the missing children seated in the attic watching one of the films. Bughuul suddenly appears on camera before physically appearing before Ellison, causing him to fall off the ladder. Ellison takes the camera, projector, and films outside and burns them with lighter fluid. His wife meets him outside, and he tells her they're moving back to their old house immediately. At his old home, Ellison receives a video-message from Jonas, who sends him scans of historical images associated with Bughuul, which include the symbol seen in the murder movies; early Christians believed that images of Bughuul served as a gateway for the demon to come from the spiritual realm to the mortal world, and children who come into contact with these images can be possessed.

Ellison discovers the unharmed projector and films in his attic, exactly as he did in the new house, along with an envelope of film labeled "Extended Cut Endings". Deputy So & So calls and informs Ellison that further research indicates every murdered family had previously lived in the house where the last murder took place, and each new murder occurred shortly after the family moved from the crime scene into their new residence. By moving, Ellison has placed himself and his family in line to be the next victims.

The extra footage depicts the missing children coming onscreen following each murder, revealing themselves to be the killers, before suddenly disappearing. Ellison becomes lightheaded and, before losing consciousness, notices a bright green liquid mixed with his coffee in the cup, along with a note reading, "Good Night, Daddy". Ellison awakens to find himself, Tracy, and Trevor bound and gagged on the floor. Ashley, under Bughuul's possession, approaches them, filming with the 8 mm camera, and murders them all on camera with an axe, using their blood to paint pictures on the house walls along with Bughuul's symbol on a door. Ashley then views the film of her murders while drawing the murder in the lid of the home movies box. The missing children stare at her through the camera but flee when Bughuul appears. He lifts Ashley into his arms and teleports into the film with her. The box of films is seen sitting in the Oswalt family's attic, now accompanied by Ashley's reel, labeled "House Painting '12". Bughuul suddenly jump scares the screen until it cuts to black.

Community content is available under CC-BY-SA unless otherwise noted.
Advertisement